Angst - A short and sweet history

It's kind of amazing that it's taken me almost 35 years to finally share some noise from the short lived band I was in for a year or so in the mid-80's, ANGST, even more so that the recordings on super cheap cassettes had survived and still play after following me around from house to house over the decades. 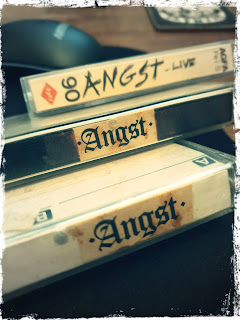 As with almost everything during the hazy days of the 80's my memories are extremely cloudy at best and appears after talking with Snapa and Sean their memories of that period aren't much better. Too many braincells lost in the daily cheap cider, homebrew and Thunderbird pickling no doubt.
Angst first came about sometime around the end of 85 / beginning of 86. I was playing in Deviated Instinct and I think at the time we were just beginning to transition from our more straightforward Anarcho punk sound to some metal inspired riffs (i.e. songs like Distance and Mindfucker). I think at that time me and Snapa (this is before he'd joined D.I) were particularly listening to a lot of new thrash metal and stuff and decided we should form a band to do heavier/harsher stuff than I was playing in D.I.
At first it was me on Guitar and vocals, Snapa on bass and our friend Charlie on drums (who I don't recall had played in any other bands at the time). Interestingly enough this would eventually be the D.I. line up that recorded NAILED a few years later in 1990. This line up of Angst didn't last too long. I did find one practice recording of this line-up but it appeared to be mostly a terrible 20 minute jam session so figured it was best left alone. We did play one gig which was in Lowestoft in February of 1986 with Extreme Noise Terror, D.I and others. I have a feeling I have a tape of this gig somewhere but I've been unable to unearth it. 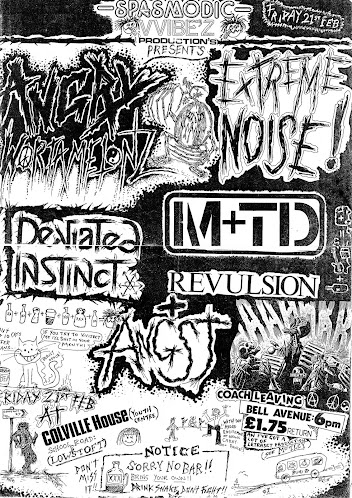 As was often the case back then we had hired a coach to take us and a shit load of punks from Norwich to the gig. As ever it was an extremely drunken affair and I remember despite the fact that we'd both played that night (in fact I'd played in two bands) somehow after no one noticed neither me and Snapa were on the coach and it left without us. Luckily Sean's folks lived in Lowestoft so we were able to crash there before hitching home hungover at the crack of dawn in the morning.
I found another flyer from April that year where we were due to play in Norwich with Generic and D.I but 'due to  a line-up change Angst will not be playing' had been hurriedly pasted over our name. That change was that Charlie had left and Sean previously of local band Paradox (and later of D.I) joined on drums and Alex (who'd just moved to Norwich from Bury) joined on guitar so I switched to vocals. We immediately dropped the few songs we'd been playing and started from scratch again with a much faster, rawer sound, still with a slight metal edge but a lot more hardcore punk in the mix.
I think we took things a bit more seriously than before and started regularly rehearsing in this great little rehearsal room Sean discovered in Lowestoft.
I've compiled the best of the rehearsal recordings from the tapes here onto YouTube. These were recorded on a knackered boombox in the corner of the room so are raw, rough and ready and as they were taken from various sessions the quality changes a bit throughout but I think definitely encapsulates the vibe and energy. I was surprised how great it sounded and really enjoyed hearing this stuff again. It was a bit of a challenge trying to figure out song titles from the one little lyric sheet I found and there's a couple of songs I've no recollection at all of what they were called.
From what I can work out the track list is as follows - 1 - Satan Sucks Shit. 2- The Enemy Within, 3 - (Riding on) The Dragons Breath) 4 - Satan Sucks Shit 5 - ?? 6 - ?? 7 - The Enemy Within. 8 - The Usual Shit. 9 - Bloodbath. 10 - (Riding on) The Dragons Breath. 11 - Satan Sucks Shit. 12 - The Enemy Within. 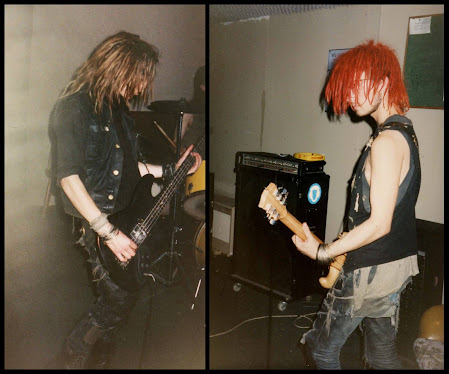 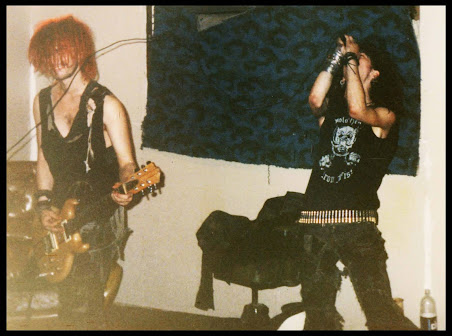 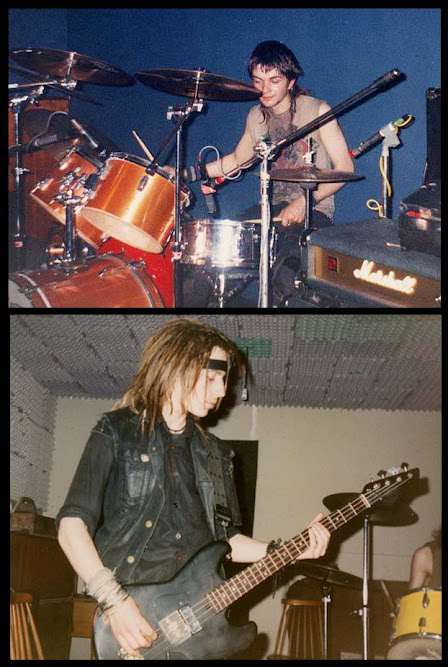 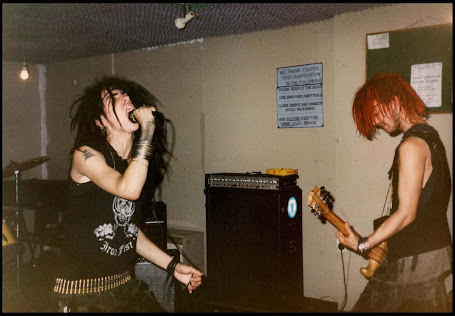 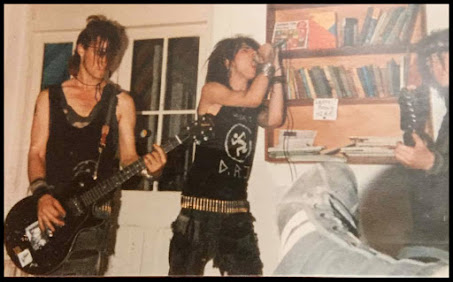 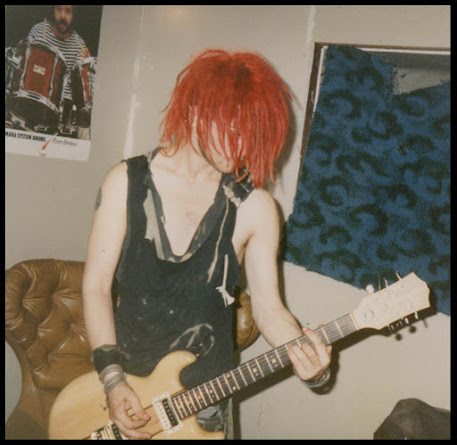 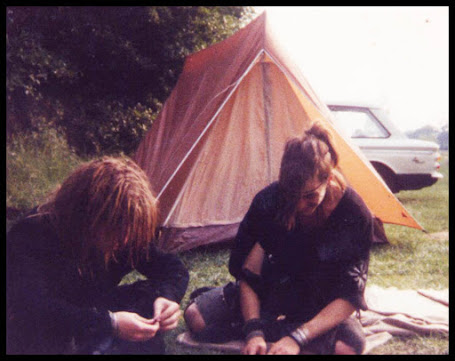 Snapa and Alex at the Norwich Rainbow Fair. 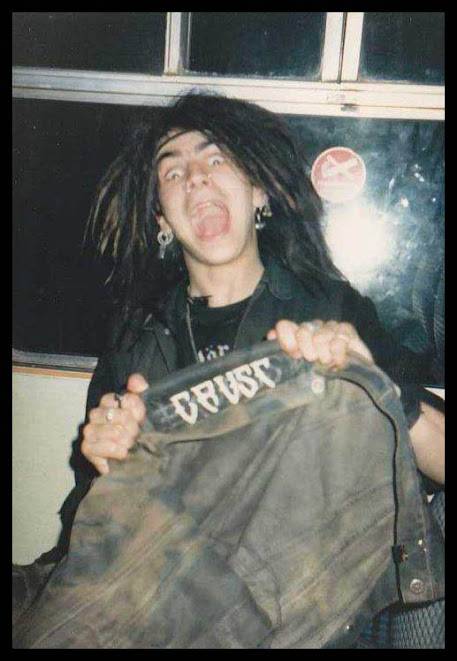 On the train on the way to Angst practice in Lowestoft.
From what I remember this line-up of Angst also only did one gig. A rather chaotic affair at the Norwich Labour club sometime later in 1986, I haven't been able to find a flyer and have no recollection of who else played. I did dig up a rough and ready live recording though. I remember the on stage sound was atrocious, none of us could hear each other (it shows) plus being drunk didn't help a lot, still despite all that I remember it being a total doss. Enjoy the racket.
Track list as far as I can tell is -
1 - I Spit Upon Your Grave. 2 - (Riding on) The Dragons Breath. 3 - Satan Sucks Shit. 4 - ?? 5 - The Enemy Within. 6 - The Usual Shit.
These are the only two shots that have ever surfaced from that momentous night. 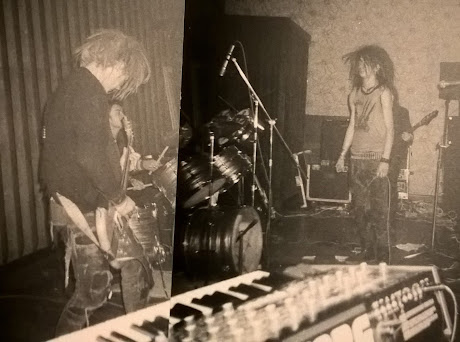 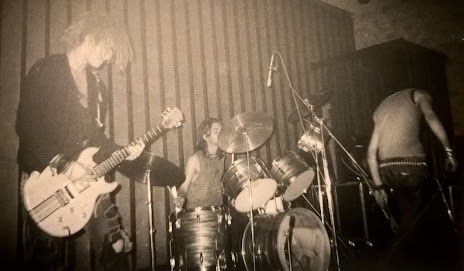 And that folks seems to be it. On the lyric sheet I found it does say 'Demo soon' and we certainly planned to continue but it seems things just faded away as is often the way. I remember after Mark quit D.I Sean joined our tattered ranks and soon after we kicked Ian out and Snapa jumped in on bass, so with 3/4 of Angst now in D.I, plus Alex moved back to Bury I think that was that. It's a shame we never did get to record anything properly but it was fun while it lasted. I'm glad I do still have these few photos and recordings to document the whole thing. It was a doss and hopefully something that's been worth sharing. 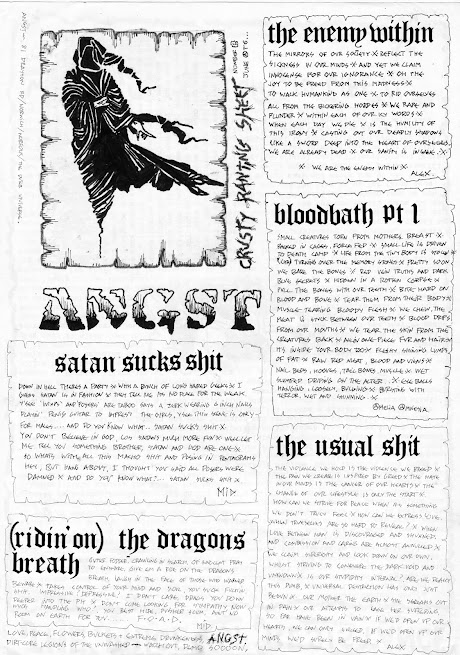 Mid
Norwich, United Kingdom
Hi, for those that don't know me when I'm not at the dull dayjob earning a crust (pun intended) I make art in various styles and mediums and play guitar in Deviated Instinct and Haavat. This blog is just a way for me to share whatever creative endeavours I may be involved in and also all the various musical and art based projects of the past that I have gathering dust around the place. Also the occasional random rambling observation of life and general unpacking of my muddled mind. Hello, pleased to meet you.